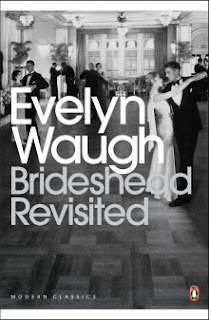 It's been awhile since I finished Brideshead Revisited and it has been even longer since I have written a blog about one of the challenge books. Three things have happened. One is that I joined a book club, two is that I have joined the National puzzler's League and three is that I have found a  board game community in my neighbourhood. All of these new fun hobbies have been competing for my time and mean that the challenge has fallen by the wayside. I am determined not to let it slip altogether because I am now on book 75 and it would be a shame to stop when I am so close to the end! What it does mean, however is that my pace of reading the novels is significantly slowed. I am no longer determined to read a challenge book a month, but rather to plug a long at a steady pace.

I really liked this book! It has been so long since I said that. The novel follows Charles Ryder as he interacts with Sebastian and his complicated family. It is a novel about nostalgia and first love and it feels sad and beautiful.  Waugh himself says "My theme is memory" at the beginning of book three.

There are a lot of really lovely lines throughout the novel and also a lot of beautiful imagery.

Here is a line that I think sums up the novel:

"perhaps all our loves are merely hints and symbols; vagabond-language scrawled on gate-posts and paving-stones along the weary road that others have tramped before us; perhaps you and I are types  and this sadness which sometimes falls between us springs from disappointment in our search, each straining through and beyond the other, snatching a glimpse now and then of the shadow which turns the corner always a pace or two ahead of us."

I picked up a real novel for this read and chose to buy a shiny new copy of it from Chapters. I really find that things like where I am when I read the book and whether I am reading a hard copy or an e copy really make a difference on my memory of the novel.  So many of the books I have read for the challenge can picture where I am when I read it. This novel for instance I read in equal parts coffee shop and bed. Other books I can remember the weather or a feeling I had while reading it. A book about memory and nostalgia is something that would obviously speak to me!

The book also touches on guilt and what draws us towards or pulls us a part from God. The Marchmain family, and in particular Sebastian, are Catholic but are never quite able to reconcile  themselves to their beliefs as Catholics. Sebastian and Charles are in love with each other and while it never quite comes out and says it are most likely lovers.  Sebastian eventually ends up an alcoholic pursued by his demons and is sent around the world in an attempt to cure him of his alcoholism. Each of his sisters feels a similar why about their faith and each for different reasons. One line summed up the conflict as it appears in the novel, "I sometimes think when people wanted to hate God they hated mummy."

There was also another line about how constant their faith was for the family. "God won't let them go for long" and later speaking of God, "I caught him (the thief) with an unseen hook and an invisible line which is long enough to let him wander to the ends of the world and still to bring him back with a twitch upon the thread."

Given the themes and the feeling of nostalgia throughout the book I think this is a book best picked up later in life. I think large chunks of the book would be lost on a teen if they tried to read it in the midst of their angst and first loves. Overall I would recommend the book and I am happy that I have finally found a challenge novel that I didn't struggle to read. Next up is The Last Chronicle of Barset which I will be reading on my ereader.
Posted by magicandmystery at 10:17 AM

Beautiful and sad...an excellent description of the "feel" of this book. I'm glad to read you are not abandoning your challenge. I'm on #71 myself, but with your more relaxed pace I may beat you to 100.

magicandmystery
I love comfort....books, crafting, coffee, cooking and blankets, but every once and awhile I will shake of the dust and embark on a crazy adventure around the world. I hope you will join me!